National WWII Museum: Worldwide Casualties  (M,O,T)
The National WWII Museum of New Orleans offers a wealth of information for learning about World War II. In addition to the casualty statistics listed on this page, you can find articles profiling veterans and service members, lessons and educator resources, and resources for additional research.

WWII Interactive Timeline and Map (Y,M,O,T)
This interactive timeline and map from the American Battle Monuments Commission provides an excellent overview of worldwide events leading up to, during, and after World War Two. The timeline includes articles, photos, and videos related to events and tracks Allied- and Axis-controlled areas of the world as the timeline progresses. 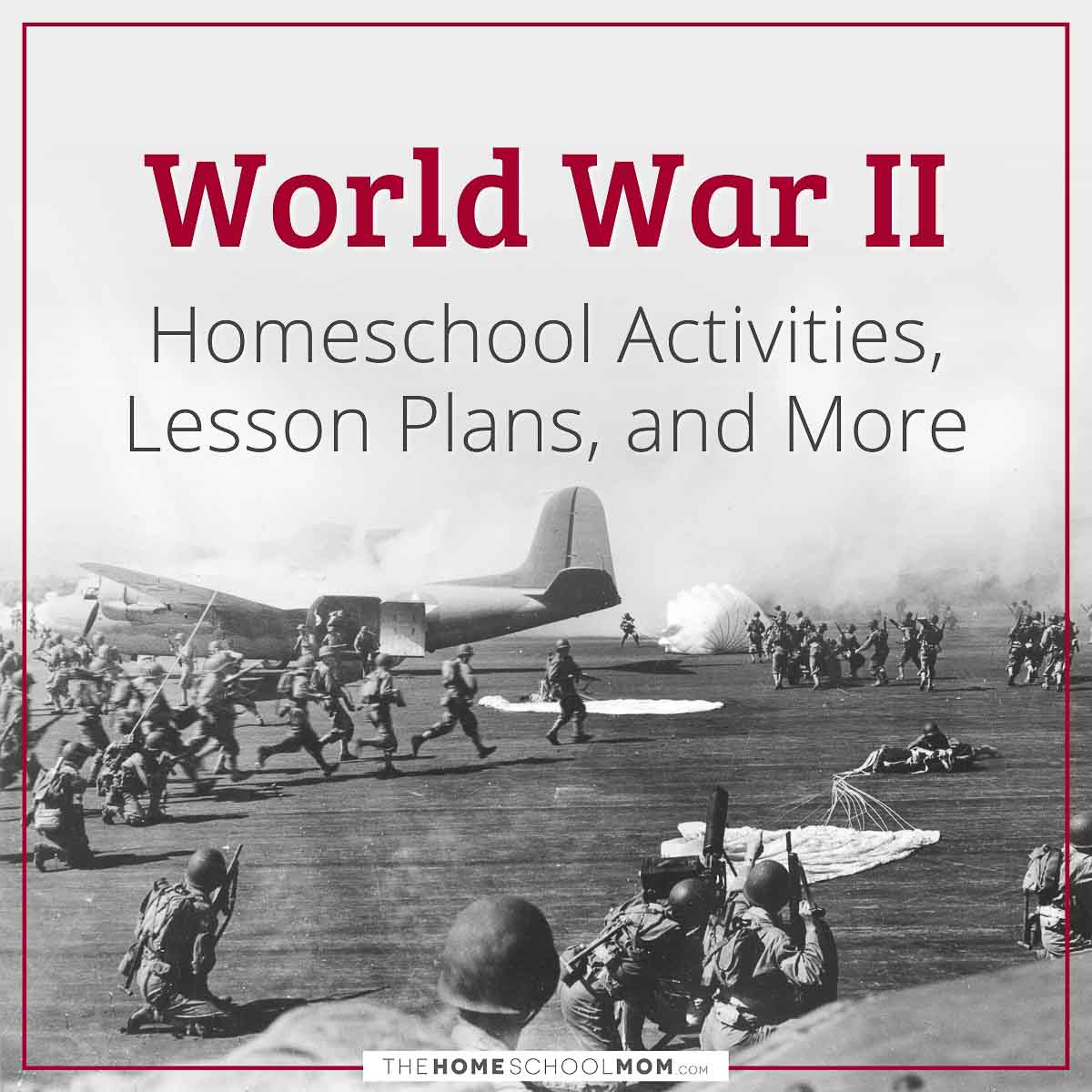 Naval History and Heritage Command (M,O)
The Naval History and Heritage Command is an association of Naval museums across the United States that collects documents, artifacts, photos, oral histories, and art from the U.S. Navy. In addition to a large online collection of primary sources, the site hosts a vast amount of historical information, where you can research specific topics, statistics, and notable service member biographies from WWII.

WWII Overview (Y,M,O,T)
This in-depth WWII overview from History provides a summarized timeline of events leading up to the war, the war in Europe, in the Pacific, and more. It includes photo galleries, videos, and related articles on specific battles, Black servicemembers in WWII, women in the war, WWII propaganda, and tons more.

WWII Library of Congress Primary Sources (Y,M,O,T)
The Library of Congress has collected all of its WWII resources into one location, including a collection of interviews following the attack on Pearl Harbor, Japanese-American internment camp newspapers, military maps, political cartoons, women workers in World War II, and much more.

The Einstein-Szilard Letter 1939  (O)
Albert Einstein wrote a letter to President Roosevelt on August 2, 1939. The letter culminated in the bombings at Hiroshima and Nagasaki.

The Manhattan Project: An Interactive History (O)
The Manhattan Project is an educational website by the United States Department of Energy's Office of History and Heritage Resources that details the U.S. Government research project that produced the first nuclear weapons used in Hiroshima and Nagasaki. It can be browsed by Events, People, Places, Processes, and Science.

WWII Ration Book Printables  (Y)
“War ration books were produced by the United States Office of Price Administration in 1942 when United States officially entered the Second World War. Shortages of essential war materials such as rubber, gasoline, and sugar were initially anticipated, but soon rationing grew to include food as well as fuel and sugar.” Pages of Ration Book 1, issued to the public May 4-7, 1942, are available to print from the Department of History at the University of Delaware.

Ducksters WWII for Kids (Y,M)
Ducksters has a WWII page that provides an introduction to world leaders, major events, battles, the Holocaust, Japanese Internment Camps, Hiroshima and Nagasaki, and more. Also included are a word search and crossword.

WWII Educational Website for Kids (Y,M)
DKFindOut has an interactive, educational WWII page for kids that lets them click and explore different topics using historical photos and stats, while providing an overview of world leaders, Allied and Axis countries, the Holocaust, and other topics.

World War Two and the Holocaust: Learner Guide (M)
This WWII overview from the BBC looks at the causes behind WWII, The Battle of Britain and the Blitz, the British Homefront, the Rise of Hitler, the Holocaust, and other topics. Designed for grades 6-7.

Japanese Americans & The Constitution: Digital Exhibition by the Smithsonian Institute (M,O,T)
This digital exhibition from the Smithsonian Institute chronicles the stories and experiences of Japanese Americans following the attacks on Pearl Harbor. Included are first-person accounts, historical photos, newspaper clippings, artifacts, and other primary sources for study.

Pearl Harbor & Executive Order 9066: A Lesson on Japanese American Internment During WWII (O,T)
In these lesson plans from PBS Learning Media, students will learn about the attack on Pearl Harbor and Executive Order 9066, signed just two months later, which authorized the relocation of Japanese Americans to internment camps. The lesson plan includes videos, historical photographs, and other primary sources for analysis.

Teaching Japanese-American Internment with the New York Times (M,O,T)
In these lesson plans from the New York Times, students will use original news coverage, photos, video interviews, and other primary sources to “to investigate the forced internment of Japanese-Americans — and track how the government has gradually apologized for some of its actions over the decades.”

WWII Veteran Stories (M,O)
The Veterans History Project of the American Folklife Center collects, preserves, and makes accessible the personal accounts of American war veterans so that future generations may hear directly from veterans and better understand the realities of war.

The American Soldier in World War II (O,T)
The American Soldier in World War II is an interactive, digital project from Virginia Tech that collects, archives, and publishes the thoughts, opinions, and experiences of US service members. You can explore content by topic, search a database of servicemember surveys, find a WWII glossary of army acronyms and slang, and find a large collection of customizable lesson plans on topics like Axis and Allied powers, combat, medical and mental health care, race, gender, and more.

African American Women in the Military during WWII (Y,M,O,T)
“American women have participated in defense of this nation in both war and peacetime. Their contributions, however, have gone largely unrecognized and unrewarded. While women in the United States Armed Forces share a history of discrimination based on gender, black women have faced both race and gender discrimination. Initially barred from official military status, black women persistently pursued their right to serve” These grade 9-12 lesson plans from the Harry S. Truman Library & Museum have students analyze primary sources and investigate the contributions of Black women to World War Two efforts.

Fly Girls  (Y,M,O,T)
During WWII, women signed up to fly with the US military. The Women Airforce Service Pilots (WASPS) test-piloted aircraft, ferried planes, and logged 60 million miles in the air.

Island Hopping: The Story of Ned Begay Code Talker: A Novel About the Navajo Marines of World War Two  (M,T)
In this lesson from Arizona State University, students study the Navajo contribution to the United States during World War II while following the story of the Ned Begay as he starts out at a boarding school and later becomes a U.S. Marine who learns the Navajo Code. Students will learn how Ned's background and culture helped him survive and become successful in his education and his experience as a Marine. Grade 5.

Native Words, Native Warriors: Navajo Code Talkers Interactive (Y,M,O,T)
Native Words, Native Warriors is a digital exhibition from the Smithsonian's National Museum of the American Indian that looks at the lives and military achievements of the Navajo Code Talkers of World Wars I and II. Click through the various exhibition sections to find related teaching and learning materials.

Minidoka National Monument  (Y,M,O,T)
A National Historic Site that commemorates the Minidoka War Relocation Center in Idaho where Japanese Americans were imprisoned during World War II. The website offers historical information about the relocation center for those who cannot visit in person.

Manzanar National Historic Site  (Y,M,O,T)
In 1942, the United States government ordered more than 110,000 men, women, and children to leave their homes and detained them in remote, military-style camps. Manzanar War Relocation Center was one of ten camps where Japanese American citizens and resident Japanese aliens were interned during World War II. The website offers historical information about the park for those who cannot visit in person.

Port Chicago Naval Magazine National Memorial  (Y,M,O,T)
On July 17, 1944, an explosion in the San Francisco east bay area killed 320 men as ships were being loaded with ammunition for the Pacific. It was WWII's worst home front disaster. Reservations are required to visit this location. The website offers historical information about the park for those who cannot visit in person.

The Mettle Behind the Merit Educator's Kit  (T)
Steve Pisanos was an ace WWII pilot and the subject of a documentary sponsored by The Distinguished Flying Cross Society. Educators can download a 4 part kit that includes a ten page .pdf using the The Mettle Behind the Merit documentary as a launching point to challenge students to deﬁne their own dream of success and realize it through intelligent work and positive behavior, a supplementary photo .pdf, a .pdf of all ﬁve of Steve Pisanos’ DFC certiﬁcates represented as they were written and awarded by the United States Army Air Force and United States Air Force, and a download of worksheet pages with discussion questions. For a small fee to cover shipping, groups can order a cut-out card of the Spitfire that Pisanos flew (20 or 40 qty.).

National WWII Museum Lessons Plans (Y,M,O,T)
The National WWII Museum has a large collection of primary-source based lessons and activities covering a range of WWII topics, including War in Europe, War in the Pacific, The Home Front, Real World Science, and Liberation & Legacy.

The United States in World War II: "The Proper Application of Overwhelming Force"  (O,T)
This is a four lesson unit in which each lesson plan is designed to stand alone. Students are given a comprehensive approach to U.S. involvement in World War II. From EDSITEment for grades 9-12.

EDSitement WWII Lesson Plans (Y,M,O,T)
EDSitement, from the National Endowment for the Humanities, has a large collection of K-12 World War II lesson plans on Japanese-American internment camps, jazz and World War II, war in the Pacific, neutrality, the Holocaust, and more.

North American Battleground of World War II  (Y,M,O,T)
These lesson plans from the National Parks Service look at the Battle of Midway that took place June 4-7, 1942, in the Midway and Aleutian islands. For grades 5-12. 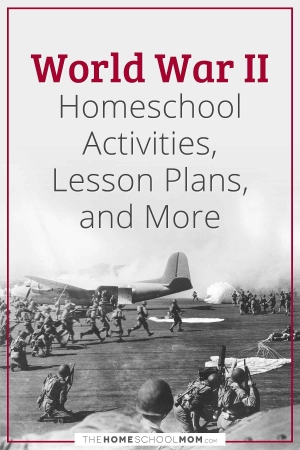