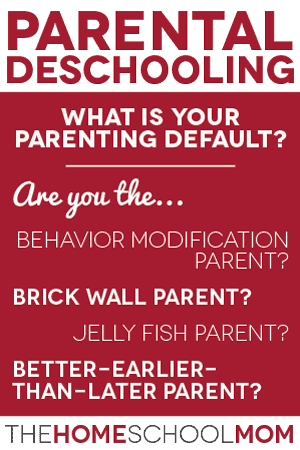 This is the fifth and final piece in a series on Parental Deschooling, which followed an introductory post, "From School to Homeschool: What is Deschooling?" and "How to Start Homeschooling: Tips for Deschooling." We've treated this topic in detail because the transition from school to homeschooling can be made easier if parents are conscious of the big adjustment involved.

Homeschooling almost always means you'll be spending more time with your children than you would if they were in school.

This means your parenting style is going to make a big difference.

Parenting Styles: What is Your Default?

What are your parenting defaults? What are your go-to strategies with your kids? Are they effective? Do they contribute to a positive relationship?

The deschooling period is a good time to begin examining your parenting defaults. Although your default parenting style may be healthy and appropriate, there are a few defaults to watch for that might be counter-productive in the long run.

If your examination of your parenting defaults leads you to try to make some changes, keep in mind that there is a lot going on during the deschooling period. If you've been a very permissive parent and suddenly move toward lots of rules, or if you've been an overly rule-based parent and suddenly try to move toward principles rather than rules, you will add to your child's stress. Gradual changes will probably work better and provide more security for your kids.

Next Post
The World's Smallest Homeschooling Co-op »
Previous Post
« What Curriculum Should I Use For My 4 Year Old?