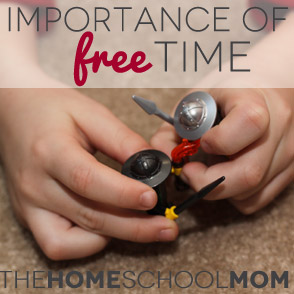 Free time was once the hallmark of childhood. But these days, many parents feel it's their duty to keep their children busy. This mindset can be found in parents who both work outside the home and need somewhere for the kids to go during off-school hours, parents who compete with other parents regarding whose child is the most "well-rounded," parents who want to give their children every so-called "advantage," and parents who believe their children will fall behind or get into trouble unless their schedules include every activity that can be crammed into each day.

The result is a generation of children who are so accustomed to organized activities that they don't know how to entertain themselves (unless there's a television or video game nearby). They're the total opposite of the kind of workers needed to grow our economy in the future. America needs creative innovators, not passive participants or couch potatoes. So if you want to encourage your children's natural creativity, reduce the amount of time they spend in scheduled activities, and give them more free time instead.

What is free time? It's unstructured. It's not directed by adults. It requires that children move through boredom in order to arrive at the place where the innate creativity of the child kicks in and comes up with something to do. But many parents dread the thought of free time for their children, because they know it will be a matter of moments before the "I'm Bored!" chorus begins.

If you have children whose time has always been planned out for them, they won't know what to do with a lot of free time—at first. But if you stick to your guns and require them to entertain themselves on a daily basis, they will (perhaps out of desperation) figure it out. See "Boredom" (Appendix A) for more about this.

So what will they do with all their free time? They can make things and work with their hands. They can use their imaginations to come up with games, structures, even toys. In the absence of planned activities and formal schedules, children are incredibly good at learning from their play. They just need enough time to do so.

Children also need time to be alone so they can think. In this frantically scheduled world we live in, even adults find they don't have time to just sit and think. But quiet introspection is important for everyone, young and old. It's particularly important for those who create things. Much solitary thought is required for pursuits such as writing, painting, inventing, etc.

Free time isn't only a necessity for small children; older children and teens need plenty of it, too. Many extremely creative people are late-bloomers (as Edison was). They need ample time alone as they grow older and discover what their gifts are, and how they want to use them. Unfortunately, parents and schools tend to increase the outside activities of teens just when they really need their personal time.

Tightly scheduled lives are detrimental to creativity. In 1996, Harvard Business School professor Teresa Amabile, an expert on creativity and business innovation, led a research project to study creativity in the workplace. Amabile and her team pored over almost 12,000 journal entries from over 200 people working on creative projects in a variety of different companies. One of their most important conclusions was that time pressure actually decreases creativity. While many people (myself included) feel that working against a deadline makes them more productive, it may not make them more creative. It takes time for creative ideas to grow and develop in our minds. The Amabile study found repeatedly that creative people on a tight time schedule found their creative abilities hampered not only up until their deadlines, but even for a few days afterward.

What this means for our children is that they need regular free time in order to feed the creativity and spirit of innovation they were born with. It takes time to get deeply involved in a creative pursuit; as parents, it's up to us to make sure our children get that time.

Excerpted from Thriving in the 21st Century: Preparing Our Children for the New Economic Reality, (Cardamom Publishers, 2011). Barbara Frank homeschooled her four children for 25 years. You'll find her on the web at www.barbarafrankonline.com and www.thrivinginthe21stcentury.com