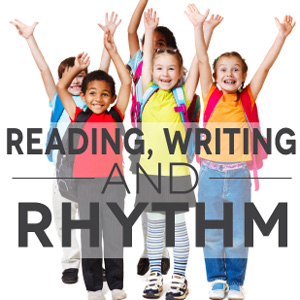 A new year has arrived for our homeschool co-op, and I'm delighted to have a new bunch of kids to write with. Last year, I led ongoing weekly writing workshops for our high schoolers and middle schoolers.  This quarter, I get to work with our elementary age writers.

We have some new families in co-op, and some of the moms told me that knowing they would have "a writing class" made their kids not want to join the co-op at all. Fortunately, their moms persuaded them to give co-op a chance.

This gave me a chance to get started with my unorthodox approach to helping kids with their writing. Our first class had us playing the kinds of word games and clapping games I've written about previously. Additionally, because these are younger kids, we also moved our bodies in rhythm with our word games. I had them marching around with the well-known chant: "Left....Left....Left Right Left. Left....Left....Left Right Left." And then they added rhymes, alliterations, and word associations to the rhythm of our marching.

We got everything from simple to delicious results, such as:

The kids were delighted to get a chance to use their bodies to create rhythm with their "marching," and they quickly became adept at matching words to the same rhythm. It's challenging though, upping the ante over the sitting-still rhyming games. This means it can also be silly, as we reach for words that don't quite fit or our marching gets less organized. And so we laugh and have fun, and then pull it back together with a renewal of the rhythm and another round of wordplay.

After the word play and movement, we did some collaborative story telling, I read the Greek myth featuring Helios, and I introduced the idea of "origin stories" and "pourquoi" tales, to set the stage for our second class to take place the next week.

I was pretty sure the kids were getting exactly what I was wanting them to get -- enjoyment of word play, and a sense that "writing" is simply extending our voices -- and even our bodies -- into the story.

The reports came back that the kids were surprised and relieved that they hadn't done any of the dreaded writing in "writing class." This could be enough to make me second guess myself, writing teacher that I am supposed to be -- but I've done this before and know where I'm going.

Still, a writing teacher has to wonder whether her marching will be understood.

And then BBC News published the story, "Moving to the Rhythm Can Help Language Skills":

Moving in time to a steady beat is closely linked to better language skills, a study suggests.

The researchers suggest that practising music could improve other skills, particularly reading.

This doesn't surprise me, since I've read and thought a lot about the intertwining of language, rhythm, music, and movement. However, it was nice to have an article to post for any of the homeschooling parents who might have wondered what my marching exercises might have to do with writing.

A writer friend, Tim Thornton, twisted the American Bandstand line this way in his Facebook comment about the BBC article -- "It's got a good beat, and you can read to it."

And, you can write to it.