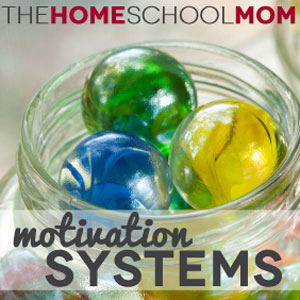 Does your child have trouble staying on task? Constantly forget to pick up after herself? Complain whenever it’s time to "do school"?

Motivation systems to the rescue!

Motivation systems, also known as token economies, can do wonders to help homeschoolers deal with problematic behaviors, recognize and encourage desired behaviors, and establish an organizing principle for children. While they are not a panacea for any and all behavioral difficulties, they can be indispensible for targeting specific behavioral areas on which the child needs to work. Star charts, card-turning systems, smiley faces on the fridge, and earning M&Ms are all examples of different types of motivation systems.

Without getting too psychology-ish, motivation systems are based on Behavioral Learning Theory – the idea that learning is the result of responses to stimulus in the environment, and that the outcome following a behavior determines the frequency of that behavior’s occurrence in the future. It is the idea of cause and effect, or ABC: there is an Antecedent (or stimulus present), a Behavior in response to that antecedent, and a Consequence or outcome as a result of the behavior. While learning theory is a somewhat simplistic understanding of human behavior which tends to ignore cognitive, emotional, and spiritual forces, it is helpful for constructing effective motivation systems for children.

How does this relate to actually creating a motivation system at home?

Well, to start out, there are two major elements you must be aware of when creating a token economy:

Motivation systems can include just one of these elements or both reinforcement and consequences. Regardless of what type of system developed, children will make behavioral change most quickly and effectively when parents use a parenting philosophy that includes both reinforcement and consequences – when provided both with positive or reinforcing experiences when they do the right thing, as well as consequences or negative effects when they do something wrong. And we as parents often struggle with both in our disciplinary processes! It can be easy to run out of consequences, or simply get too tired to address that behavior yet again with some kind of punishment. Likewise, when we are busy homeschooling and parenting and homemaking and working, it is a temptation to just address the problematic behaviors, and not even notice, or reinforce, those times when children do the right thing. Motivation systems are a great way to incorporate both reinforcement and consequences more effectively into our parenting repertoire.

As you think about developing a motivation system for your child, keep in mind the following things:

Next Post
How To Use A Microscope »
Previous Post
« Creating a Motivation System - Do You Need One?