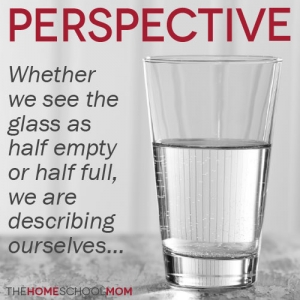 Take a moment to describe three people you know. Perhaps your kid’s coach, your neighbor, and a close friend.

Tally up the negatives and positives. What do they indicate?

Actually, they say a lot more about you than the people you’re describing.

Research indicates what we perceive in others has a lot to do with who we are. According to a study in Journal of Personality and Social Psychology, the tendency to positively assess people in our social networks is linked to our own enthusiasm, happiness, kind-heartedness, politeness, emotional stability, life satisfaction, even how much others like us.

A lead researcher says, “Seeing others positively reveals our own positive traits.”

The opposite is also true. The study found that how negatively we view others is linked to our own unhappiness as well as a greater likelihood of problems such as depression, narcissism and antisocial behavior.

Apparently whether we see the glass as half empty or half full, we’re describing ourselves.

This puts a whole new angle on the burden of setting a good example! I tell my kids to look for the good in others. And I try, I really try to do that myself. I realize it isn’t reasonable to cast a positive light on every person we know. But clearly, making an effort is worthwhile. Besides, my kids toss my words right back at me when they catch me critical about bad drivers or annoying politicians. “Aren’t we supposed to look for the good in others?”

Those kids are real beasts. I mean sweethearts!