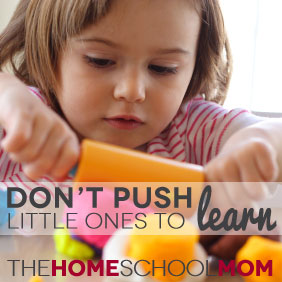 Take a look at promotional material for preschools in your area. Chances are there's an emphasis on early math, pre-reading, and other academics. This approach sells.  Nearly everyone I know is sure their children benefit from playing with blinking, beeping toys that "teach." Most of them sign their children up at the age of two or three to attend specialized enrichment programs that claim to boost abilities in science, art, sports, or language.

These well-intentioned parents operate on a mindset that’s hard to dismiss in today’s society. They are convinced that learning flows from instruction. Logically then, early instruction will help maximize their potential. But learning in young children (and perhaps at all ages) has much more to do with curiosity, exploration, and body-based activities.

Recent studies with four-year-olds showed that, “Direct instruction really can limit young children’s learning.”  It also limits a child’s creativity, problem solving, and openness to ideas beyond the situation at hand. This is true when the instruction comes from parents as well as teachers.

As Wendy S. Grolnick explains in The Psychology of Parental Control: How Well-meant Parenting Backfires (affiliate link), research shows that rewards, praise, and evaluative comments actually undermine motivation and stifle learning in preschoolers as well as school-aged children. This is true when those actions come from parents or teachers.

Highly instructional preschool programs have been studied for years. Although they’re more popular than ever, the outcomes don’t hold up under scrutiny. Researchers followed at-risk children who attended different preschool environments.  Some children were enrolled in an academic setting, others in a child-initiated play setting, and a third group in a preschool that balanced both approaches. By the middle grades, children from the play-oriented preschool were receiving the highest grades. They also showed the most social and emotional maturity.  Those who had attended the academic preschool lagged behind in a significant way— poorer social skills. The differences became more apparent as these children got older. By age fifteen, students from the academic preschool program showed twice as much delinquent activity as the other two groups. And in adulthood, former students of the play preschool and balanced preschool showed higher levels of success across a whole spectrum of variables. The academic group did not attain the same level of education as the play group and required more years of treatment for emotional impairment. They also faced more felony arrests than the other two groups.

It was common knowledge in our grandparents’ generation that children should be raised with an emphasis on compassion, self-control, and social skills along with plenty of opportunities to play freely. It may not be as easy to sum up as that but it doesn’t have to be as complicated as academics for toddlers.

Play: How it Shapes the Brain, Opens the Imagination, and Invigorates the Soulby  Stuart Brown and Christopher Vaughan

Einstein Never Used Flashcards: How Our Children Really Learn--and Why They Need to Play More and Memorize Less by Roberta Golinkoff, Kathy Hirsh-Pasek, and Diane Eyer

The Power of Play: Learning What Comes Naturally by David Elkind