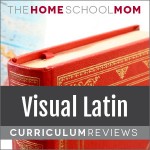 Visual Latin is a video-driven Latin homeschool curriculum taught by veteran Latin teacher Dwane Thomas. It’s quite unique. Three short videos are paired with three sets of worksheets to guide students from grammar concepts, to practice sentences, to reading in Latin. The goal is to enjoy learning Latin and strengthen students' understanding of English grammar and vocabulary along the way.