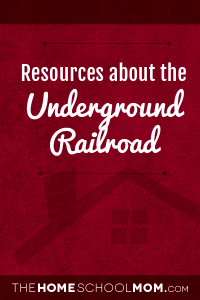 How Slaves Found their way North  (Y)
Students learn about natural and human-made clues that helped slaves find their way north through the Underground Railroad. Then they create a quilt with clues about routes to freedom. Grades 1-2

The Underground Railroad   (T)
Resources for teachers from Scholastic.com

How the Underground Railroad Worked  (Y, M, O, T)
From How Stuff Works.com

Newton History Museum  (Y,M,O,T)
The Newton History Museum presents permanent and changing exhibits on a variety of historic topics. Discover what life was like for New England's earliest settlers. Learn about the abolition movement in Newton and how the Jackson family used their home as a stop on the Underground Railroad. The museum houses the Newton Historical Society and holds an extensive library and research collection.

John Brown Museum  (Y,M,O,T)
Reverend Samuel Adair and his wife, Florella were peaceful abolitionists who came to Kansas and settled near Osawatomie, an abolitionist community and a center of conflict during "Bleeding Kansas." The Adair cabin was a station on the Underground Railroad and Florella's half brother, John Brown,used this cabin as his headquarters. The cabin survived the Battle of Osawatomie where John Brown and 30 free-state defenders fought 250 proslavery militia in 1856, and stands on the battle site today. Learn more about the Adairs, John Brown, and others who struggled to survive the border war when you visit the John Brown Museum.

Levi Coffin House  (Y,M,O,T)
A part of the legendary Underground Railroad for fleeing slaves of pre-Civil War days, this registered National Historic Landmark is a Federal style brick home built in 1839. Levi and Catharine Coffin were legendary in helping many former slaves escape to freedom in the North. During the 20 years they lived in Newport, the Coffins helped more than 2,000 slaves reach safety.