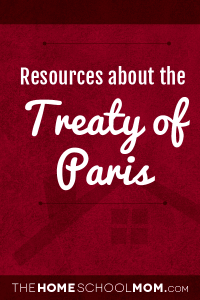 History Brief: The Treaty of Paris 1783  (Y,M,O,T)
From Reading Through History on You Tube

Treaty of Paris (1783)  (Y,M,O,T)
This treaty, signed on September 3, 1783, between the American colonies and Great Britain, ended the American Revolution and formally recognized the United States as an independent nation. From the National Archives.

Revolution and the New Nation (1754-1820s) The Treaty of Paris  (Y,M,O,T)
National Archives and Records Administration