Islam, the Quran, and the Five Pillars All Without a Flamewar (Crash Course World History) 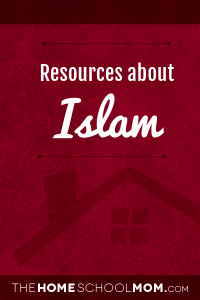 The Golden Age of Islam  (M,O,T)
From the larger site Teaching the Middle East, this section on Islam covers the background and areas of achievement of classical Islamic civilization from 610 to 1258 CE.

Islamic Holidays - Eid-ul-Adha, the Festival of Sacrifice  (Y,M,O,T)
From Religion Facts.com - Just the facts on religion.

Islamic Observances - Hajj, the Pilgrimage to Makkah  (Y,M,O,T)
From Religion Facts.com - Just the facts on religion.

Islamic Holidays - Eid-ul-Fitr, the Festival of Fast-Breaking  (Y,M,O,T)
From Religion Facts.com - Just the facts on religion.

Islamic Holidays - Ramadan, the Month of Fasting  (Y,M,O,T)
From Religion Facts.com - Just the facts on religion.

Ramadan on the Net  (Y,M,O,T)
From Holidays on the Net.work.

Ashura  (Y,M,O,T)
Ashura (also spelled Aashurah, Ashurah or Aashoorah), is an Islamic holiday observed on the 10th of Muharram, the first month of the Islamic year. The word Ashura means "10," denoting the date of the holiday.

Lailat-ul-Quadr  (Y,M,O,T)
September 16, 2009, called the "Night of Power" commemorates the night in which the Prophet Muhammed received the first revelation of the Qur'an. Shia Muslims believe that their fate for the upcoming year will be decided on this night, so they pray to Allah throughout the night and ask for forgiveness and salvation.

Islamic Golden Age  (Y,M,O,T)
The Islamic Golden Age is traditionally dated from the mid-7th century to the mid-13th century at which Muslim rulers established one of the largest empires in history. During this period, artists, engineers, scholars, poets, philosophers, geographers and traders in the Islamic world contributed to agriculture, the arts, economics, industry, law, literature,navigation, philosophy, sciences, sociology, and technology, both by preserving earlier traditions and by adding inventions and innovations of their own.

The 5 Pillars of Islam  (Y,M)
A brief explanation for younger students

A Short Summary of Islamic Beliefs and Eschatology  (M,O,T)
A collection of comments and links; good basic information.

Islam  (Y,M,O)
An excellent resource from PBS that explores the history and practice of Islam