Francis Scott Key is known for writing the Star Spangled Banner, also known as the National Anthem of the United States. During the war of 1812, Key, a lawyer, was aboard the British ship HMS Tonnant negotiating the release of a political prisoner when the Battle of Baltimore broke out centered around Fort McHenry. At dawn the next day, Key reported seeing the American flag waving over Fort McHenry and had the inspiration to write a poem upon which the anthem is based. The song, based on Key's poem, was adopted as the United States national anthem in 1916 by Executive order from President Woodrow Wilson.

Francis Scott Key, the Reluctant Patriot (Y,M,O,T)
Francis Scott Key, writer of the Star Spangled Banner, was “an unlikely candidate to write what would become the national anthem. He had referred to the conflict as “abominable” and a “lump of wickedness,” siding with the many Americans...who believed that a diplomatic accommodation with Britain could have avoided hostilities altogether.” From the Smithsonian Magazine.

Francis Scott Key’s Slave-Holding Legacy (M,O)
Francis Scott Key was a lawyer and District Attorney for the City of Washington who worked on several high-profile cases in which he defended slavery. Learn more about Key’s work and the abolitionist movements of his time in this Smithsonian Magazine article.

Francis Scott Key  (Y,M,O,T)
Francis Scott Key was a lawyer and an amateur poet. Learn more about Key and the writing of the Star Spangled Banner from the Smithsonian National Museum of American History.

Francis Scott Key Activity Page  (Y,M,T)
A brief overview of the events that led to the writing of the Star Spangled Banner from Garden of Praise that includes a quiz, puzzles, coloring pages, and more.

The Star-Spangled Banner Lesson  (M,T)
Learn about the Bombardment of Fort McHenry and how it influenced the writing of Francis Scott Key’s "The Rockets' Red Glare." From the National Park Service. Designed for grades 6-8.

Who Wrote the National Anthem? (Reading Activity) (Y,M)
A reading and vocabulary exercise for kids on the history of Francis Scott Key’s writing of the national anthem. 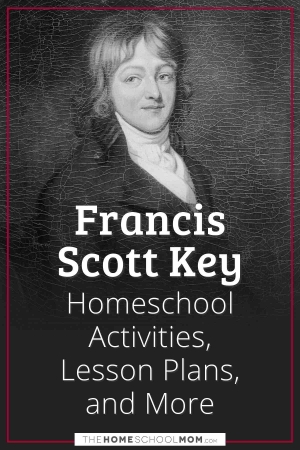