The Schomburg Center for Research in Black Culture  (Y, M, O, T)
The Schomburg Center for Research in Black Culture at the New York Public Library has a large online collection of historical photos, art, artifacts, oral history recordings, books, newspapers, and other primary sources for studying Black history and culture in the US. In addition, its #SchomburgSyllabus catalogs a wealth of Black-authored educational resources, covering the topics of Afrofuturism & Comics, Fashion, Film, Disability, the Black Panther Party, Politics and Activism, Environmental Racism, Medical Racism, and much more.

Black History in Music  (Y, M, O, T)
This lesson collection from Teach Rock "highlights the intersections of music and black experience in America, from slavery to the Civil War to abolition to Reconstruction and sharecropping to the Great Migration to Southern integration. The collection also focuses on the various social movements initiated by the Black community, from Civil Rights to Black Power to Black Lives Matter. In addition, a pair of lessons explore the establishment of the Birthday of Martin Luther King, Jr. national holiday – both the legislative process and Stevie Wonder’s long-lasting musical contribution to the successful public campaign. Finally, several lessons focus on prominent African American writers and artists such as Langston Hughes, Gwendolyn Brooks, and Gordon Parks." 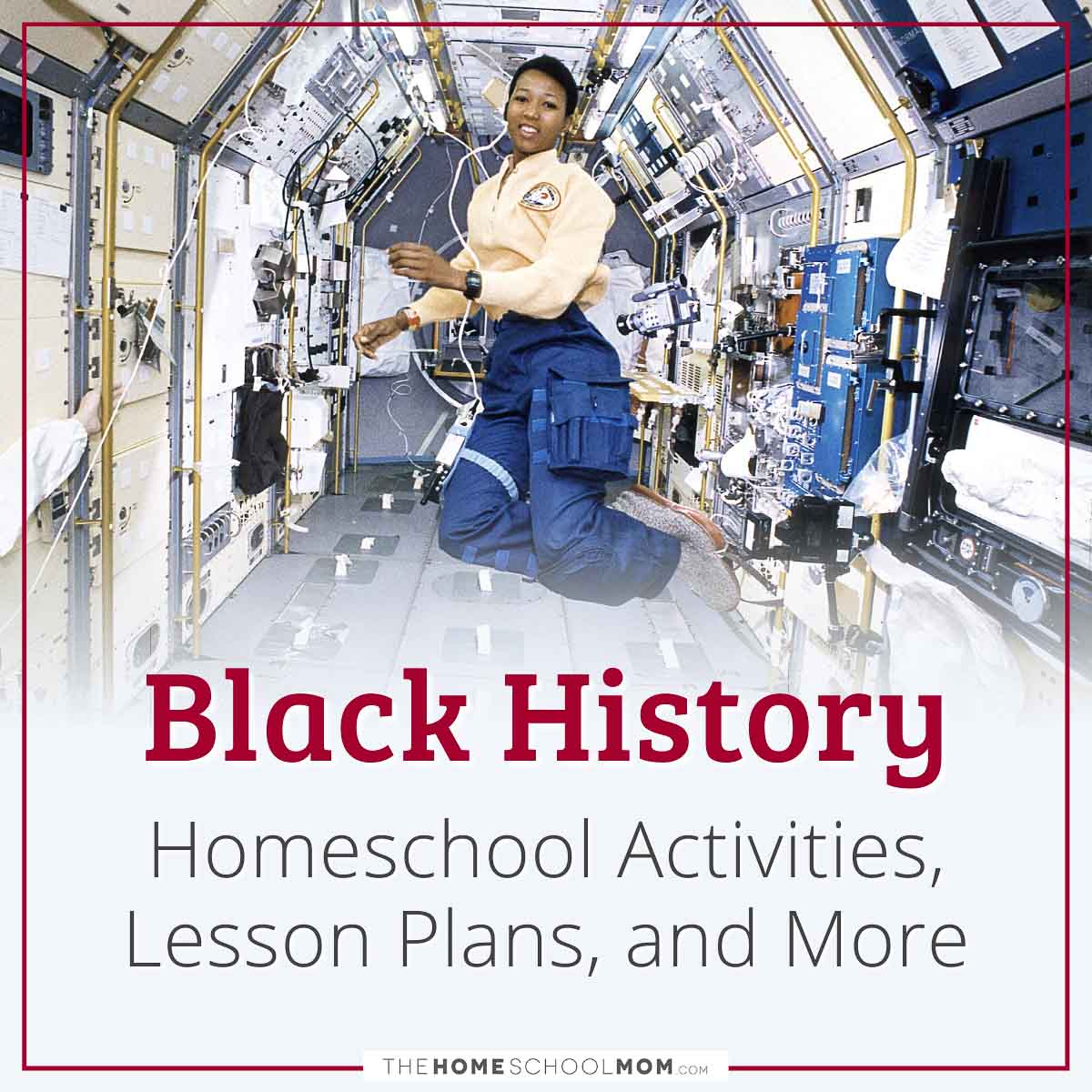 The Harlem Renaissance  (M, O, T)
"The Harlem Renaissance was a period of rich cross-disciplinary artistic and cultural activity among African Americans between the end of World War I (1917) and the onset of the Great Depression and lead up to World War II (the 1930s). Artists associated with the movement asserted pride in black life and identity, a rising consciousness of inequality and discrimination, and interest in the rapidly changing modern world—many experiencing a freedom of expression through the arts for the first time." These lesson plans, activities, and primary sources from the National Gallery of Art cover pioneering Black artists from the Harlem Renaissance.

Black Women in STEM  (Y, M, O)
Black women hold the title of many famous firsts in history, many of which are in the field of science, technology, engineering, and mathematics. Here's 50 pioneering Black women in STEM you should know about.

Black Women’s Suffrage  (Y, M, O, T)
"The Black Women’s Suffrage Digital Collection is a collaborative project to provide digital access to materials documenting the roles and experiences of Black Women in the Women’s Suffrage Movement and, more broadly, women’s rights, voting rights, and civic activism between the 1850s and 1960. The materials in this collection include photographs, correspondence, speeches, event programs, publications, oral histories, and other artifacts." From the Digital Public Library of America.

NASA Black History  (Y, M, O)
This Black History page from NASA profiles the Black men and women who have made and are continuing to make history through their work in STEM.

African American Intellectual History Society  (M, O, T)
"The African American Intellectual History Society (AAIHS) is an independent scholarly organization that aims to foster dialogue about researching, writing, and teaching black thought and culture. AAIHS originally began as a blog founded by Christopher Cameron in early 2014." The AAIHS blog, Black Perspectives, is an excellent resource for learning about Black history through the eyes of Black scholars. You can find hundreds of articles covering Black history in art, music, politics, science, and more. The site also has a syllabus for additional learning.

13th  (O)
13th, named after the 13th Amendment which abolished slavery and involuntary servitude, except as a punishment for crime, is a documentary that explores the history of slavery in the US and the policies that followed it. You can watch the full film for free on YouTube.

Teaching About the Tulsa Race Massacre With The New York Times  (M, O, T)
"In this lesson, students will explore a 3-D model of historical Greenwood — home of “Black Wall Street” — and then learn about how a white mob destroyed a prosperous Black community 100 years ago."

The 1619 Project Curriculum  (Y, M, O, T)
The 1619 Project is a 100-page, special issue of the New York Times Magazine published in 2019 that reframes and then details American history following the arrival of the first slave ship to the U.S. in 1916. It digs into infrequently taught history from the nation's found to modern-day Redlining and Mass Incarceration practices. This curriculum by the Pulitzer Center includes a pdf version of the magazine, reading guides, accompanying podcasts, lessons, activities, and more.

Black Past  (Y, M, O, T)
Black Past is a website dedicated to anything and everything Black History. The site has a vast catalog of primary and secondary sources to study both African and African American History. It includes links to museums and institutions, newspapers and periodicals, informational pages on Black issues, famous firsts, STEM, arts, biographies, and more, as well as dedicated children's pages.

Hampton National Historic Site   (Y,M,O,T)
Hampton is the name of the georgian estate built in the early 1800's. The historic site there tells the story of the people, enslaved African Americans, indentured servants, industrial and agricultural workers, and owners, who worked there.

Central High School National Historic Site   (Y,M,O,T)
Little Rock Central High School is recognized for the role it played in the desegregation of public schools in the United States. The website offers historical information about the park for those who cannot visit in person.

Carter G. Woodson Home National Historic Site   (Y,M,O,T)
Carter Godwin Woodson was an African-American historian, author, journalist and the founder of the Association for the Study of African American Life and History. The website offers historical information about Carter Godwin Woodson for those who cannot visit in person.

The Story of Nicodemus  (Y,M,O,T)
The first town established by African Americans after the Civil War. This is a feature website from The National Park Service.

Boston African American National Historic Site  (Y,M,O,T)
The African Meeting House was built in 1806 to house the first African Baptist Church of Boston. It was the first African American Baptist church created north of the Mason Dixon Line and is now the oldest surviving black church building in America. In 1863, it served as a recruitment post for the Massachusetts 54th Volunteer Regiment, which was the first official African American military regiment to fight for the Union in the Civil War. The website offers historical information about the church for those who cannot visit in person.

40 Unsung Heroes of Black History We Should All Learn About This Month  (M,O,T)
February is Black History Month. While schools feature Black history this month, most students will only hear about the same handful of prominent figures: Rosa Parks, Martin Luther King, Jr., and perhaps a few others. Such a limited view ignores the countless historical achievements of many Black men and women who faced enslavement, violence, and prejudice on their roads to greatness. From early inventors, authors, and entrepreneurs to civil rights activists and politicians, the scope of Black history is far older and more significant than the March on Washington or "I Have a Dream." Read on to learn more about sadly forgotten figures in Black history.

George Washington Carver Coloring and Activity Book  (Y,M)
From the Department of Agriculture with art work submissions by the National Park Service and the American Peanut Council.

The National Center for the Study of Civil Rights and African-American Culture  (Y,M,O,T)
The Center focuses on documenting and preserving memorabilia from the civil rights period, Montgomery black history, and the history of Alabama State University.

Maggie L. Walker National Historic Site  (Y,M,O,T)
Maggie Lena Walker was an African American teacher and businesswoman. She was the first female bank president and the first woman to charter a bank in the United States. Walker also became an example for people with disabilities later in life when she became limited to a wheelchair. The website offers historical information about Maggie Lena Walker for those who cannot visit in person.

Nicodemus National Historic Site  (Y,M,O,T)
At the end of the Civil War, African Americans left the south and settled in the Great Plains. Nicodemus is the oldest and only remaining all Black Town west of the Mississippi River. The website offers historical information about the town for those who cannot visit in person.

Selma to Montgomery National Voting Rights Trail  (Y,M,O,T)
Established by Congress in 1996 to commemorate the events, people, and route of the 1965 Voting Rights March in Alabama. The website offers historical information about the march for those who cannot visit in person.

Black Inventors A-Z  (Y,M,O,T)
This is a A-Z list of popular Black inventors that we have more extensive information on: biographies, images, timelines, and other media.

Rosa Parks Library and Museum  (M)
The only museum dedicated to the civil rights icon. Occasionally hosts virtual tours if you can't be there in person.

Little Known Facts About Black History  (Y,M,O,T)
Lots of biographies, a "Who Am I?" interactive quiz, teacher resources (created to accompany History Channel programming), and videos

The African-American Mosaic  (O)
A Library of Congress Resource Guide for the Study of Black History and Culture; taken from an exhibit of the same name.