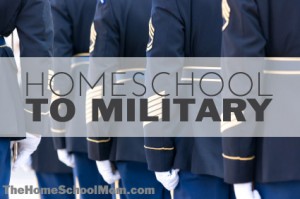 Note: This is not legal advice. The information is not interpreted by an attorney. The information here may or may not be current or applicable to your individual situation. Military service is a serious commitment and should be undertaken only after careful consideration and your own research with reliable sources. Hopefully, some of the information here can point you in the right direction, but do not rely on any information on this site as accurate or up to date without researching it and confirming it yourself.

Homeschoolers entering the United States military must do so under the tier system of education credentials implemented in 1987 by the DoD. The tiers are as follows:

Tier 3 - Those with no education credentials.

Prior to 2007, homeschoolers typically fell in Tier 2 unless they held at least 15 hours of college credit, in which case they were considered Tier 1. In 2007, the Department of Defense modified its enlistment policy so that homeschoolers with an AFQT score of 50 or above will be classified as Tier 1. Homeschool students who score below 50 were classified as Tier 2. In June 2012, Pentagon released a new policy that made policy permanent. Homeschoolers were considered as Tier 1 candidates as long as they score 50 or above on the AFQT. As of 2014, the minimum AFQT score requirement was eliminated.

Homeschoolers have been admitted to all of the US military academies. Admission guidelines are strict and potential candidates should plan ahead to meet the standards set forth by each academy. Congressional recommendations are required for all but the Coast Guard Academy and physical fitness is a must. For more information about admission to each of the military academies, visit their websites below.

March2Success Free Test Prep - March2Success provides an online study program to help students prepare for standardized tests, improve school work and review materials. The resource also provides tools for educators and parents to track and encourage their students. March2Success provides course material all the way up to the high school level and is also an excellent tool to help students study for standardized tests such as the SAT, ACT, FSAs and ASVAB-CEP.  March2Success is provided as a public service by the Department of the Army and US Army Recruiting Command.

Ace the ASVAB - "If you're serious about joining the military, then get serious about the Armed Services Vocational Aptitude Battery (ASVAB). The ASVAB is a timed multi-aptitude test, which is given at over 14,000 schools and Military Entrance Processing Stations (MEPS) nationwide and is developed and maintained by the Department of Defense. Start now by taking our practice ASVAB tests. These tests will give you an idea of how you'll score, and identify areas that need improvement. Then use our suggested resources and ASVAB study guides to learn how to prepare for the ASVAB test."

Please note that the following resources contain helpful information but are dated. It is important to verify any information with current regulations and requirements.

Military Terms Glossary: A-M and N-Z - Also from Valerie Moon, this is a two-part list that will be helpful to anyone not familiar with the acronyms and terms commonly used in the services.

Beyond homeschooling: joining the military (May 2010) - "This article tells about some differences between the two largest career paths in the military services, becoming an officer or enlisting. It also looks at how home education affects those choices."