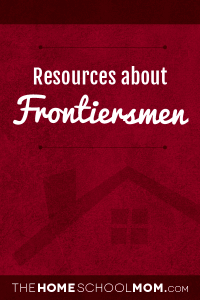 Interactive Lewis and Clark Trail  (M, O)
"This interactive allows students to follow in the footsteps of Meriwether Lewis and William Clark on one of the most important expeditions in American history—a voyage of danger and discovery from St. Louis to the headwaters of the Missouri River, over the Continental Divide to the Pacific Ocean. This interactive combines a compelling graphic interface with facts, lessons and video clips from the film."

Westward Expansion: Daily Life on the Frontier  (Y,M,O,T)
From Duckster.com

19th-Century Immigration in Wisconsin  (T)
The first quarter of the nineteenth century was marked by westward migration into the regions north and west of the Ohio River. Though Wisconsin was initially a distant frontier, the small numbers of French, English, Americans, and American Indians who resided there had nonetheless explored and used the rich land and water resources that would soon bring thousands of immigrants into Wisconsin. There are many Primary Source documents on this site from the Wisconsin Historical Society.

Bear Tracker  (Y,M,O,T)
A great tracking site for tracking more than just bears...Open to all trackers, anywhere, for the discussion of anything related to tracking. Animal tracks, human tracks, or even bicycle tracks.

Pioneer Life on the Frontier for Kids and Teachers  (Y,M)
From Mr. Donn's.org